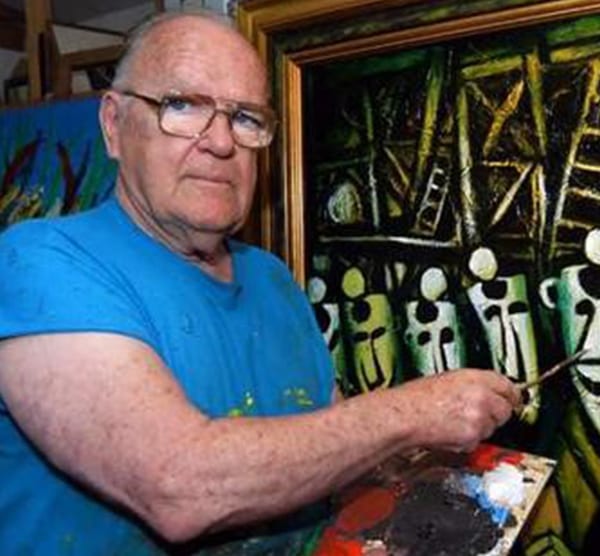 Kevin Charles Hart is an Australian artist, formally known as Pro Hart, born in Broken Hill. Hart grew on “Larloona” a sheep station, approximately 130 kilometres from Broken Hill. In his younger years, Hart was recognised as an inventor and was appropriately nicknamed ‘Professor’, which would later lead to the popular adaptation ‘Pro’. From a young age, Hart had a passion for art that steadily developed overtime. Hart moved back to Broken Hill in his early twenties, working as a miner. It is believed that his narrative painting style was inspired by his hard work and the characters in the mine.

Hart was a pioneer of the Australian outback paining movement, capturing the lush colours, the sense of space and the spiritual quality of the outback in ways very few artists are able to emulate. Hart experimented with many different mediums of performance art, including dropping paint from hot air balloons, creating ice sculptures and even using a cannon to distribute paint. Hart’s worked predominantly with oils and acrylics, using any tool or method he could to achieve his desired outcome. He drew upon techniques of layering, chiaroscuro, glazing, scumbling, scratching and Alla prima. Pro was also a sculptor working with welded steel, bronze and ceramics.

Hart’s other interests, outside of art, included collecting vintage cars and motorbikes, lifting weights to keep fit, shooting; of which he was an “A” grade pistol shooter, listening to music and inventing different kinds of engines and machines.  In 1976, he was made a member of the Order of the British Empire for his services to art in Australia. In 1982, he received an Honorary Life Membership of Society International Artistique for outstanding artistic achievement and in 1983 he received an Australian Citizen of the Year Award.