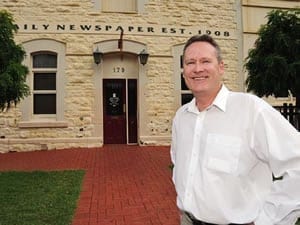 John Casey is an Australian journalist and sports broadcaster, born in Broken Hill. Casey is a respected host and play-by- play commentator as result of an extensive career. Educated at Burke Ward Primary School and Broken Hill High School, Casey was a young leader, taking on roles such as vice-president of the Broken Hill High School Student Representative Council. Casey was actively involved in the school band, athletics, and Australian Football. His career in journalism began in 1981 when he started writing for the Barrier Daily Truth at age eighteen. Upon the completion of his cadetship, Casey moved to Melbourne and joined The Sun News-Pictorial. In 1985 , he joined The News in Adelaide as a sports journalist and combined this role with duties for the Sunday Mail where he was chief racing sub-editor.

After working for seven years for several different newspapers, Casey moved to television. His career in television began with him becoming an on-camera sports presenter with SAS-10, which would later to become SAS-7. Casey would also read the weekend sports news and developed his skills as a commentator on the national tennis telecasts and as a host of the National Basketball League coverage. In 1990–91, John became the first ever sports journalist contracted to Channel 7’s London bureau and covered events such as Wimbledon, the British Open, FA Cup Finals, Prix de l’Arc de Triomphe at Longchamp, Formula One and Susie Maroney’s English Channel swim.

Casey returned to Australia in 1992 where he took up a position as a senior reporter with Channel 7’s national prime time sports program “Seasons”. In the following years, Casey’s assignments included the 1993 World Cup Qualifier in Argentina and the 1994 Commonwealth Games in Canada. Casey has commentated a wide range of historic events, including the world record swims from Ian Thorpe and Susie O’Neill and world title fights involving Kostya Tszyu and Anthony Mundine. Casey is famously recognised for his work on National Basketball League telecasts, leading the play-by- play commentary in almost 1000 NBL and WNBL games.